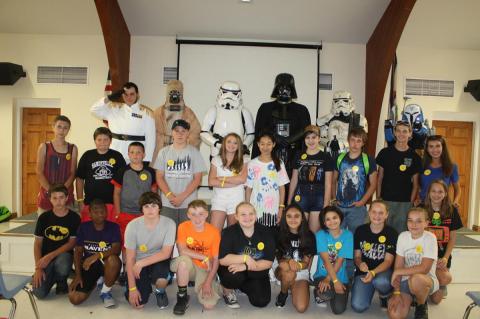 Out of This World – Camp teaches, service, conservation — by Terry Fletcher

The West Virginia Department of Environmental Protection’s Youth Environmental Program often has guest speakers and presenters from local environmental groups attend its annual Junior Conservation Camp at Camp Cedar Lakes in Ripley, but this year, the campers had visitors from a galaxy far, far away. As the 36th edition of the camp got under way, members from Vader’s 501st Legion of Giving, a Star Wars themed community outreach group, marched their way into the opening assembly and mingled with the campers. “I think everyone was thrilled,” said DEP employee and 501st Legion member Amy Higgs of the campers’ reaction. “There was shock and cheers and jaws open. With a room that big full of kids, it’s hard to tell which ones were scared, but for the most part, they were pretty excited.” The Legion of Giving is an all-volunteer organization formed to promote interest in Star Wars through the build-ing and wearing of quality costumes and to facilitate contributions to the local community through costumed charity and volunteer work.   While you have to be 18 to join the 501st, Higgs informed the campers about the Galactic Academy, which acts as a training program for those not yet of age. “I had numerous kids come up to me throughout the week wanting to know about the Galactic Academy,” she said. “In the Galactic Academy, kids are working alongside us, building a costume, and when they turn 18, they become a full-fledged member.” Higgs said all of the Legion members’ elaborate costumes are handmade and members must go through a rigorous grading process to ensure they are authentic and movie-quality.

Fellow DEP employee and Legion member Michael Boyer, dressed as a sand trooper, was also part of the presentation that included characters such as a storm troopers, a Tusken Raider and the always-popular Darth Vader. Higgs, donned in her Bo Katan costume, took off her helmet and took part in a question-and-answer session with the youngsters. “There were several of them that didn’t know about the community stuff we do,” said Higgs. “They thought it was really neat to do something like this and still give back. It doesn’t have to be just a hobby, you can give back. The reaction was pretty positive.” These intergalactic guests spoke about community involvement that many of the campers would experience firsthand. For the full article, visit http://www.dep.wv.gov/pio/Documents/InDEPth%20newsletter/inDEPth%20July-August%202016.pdf