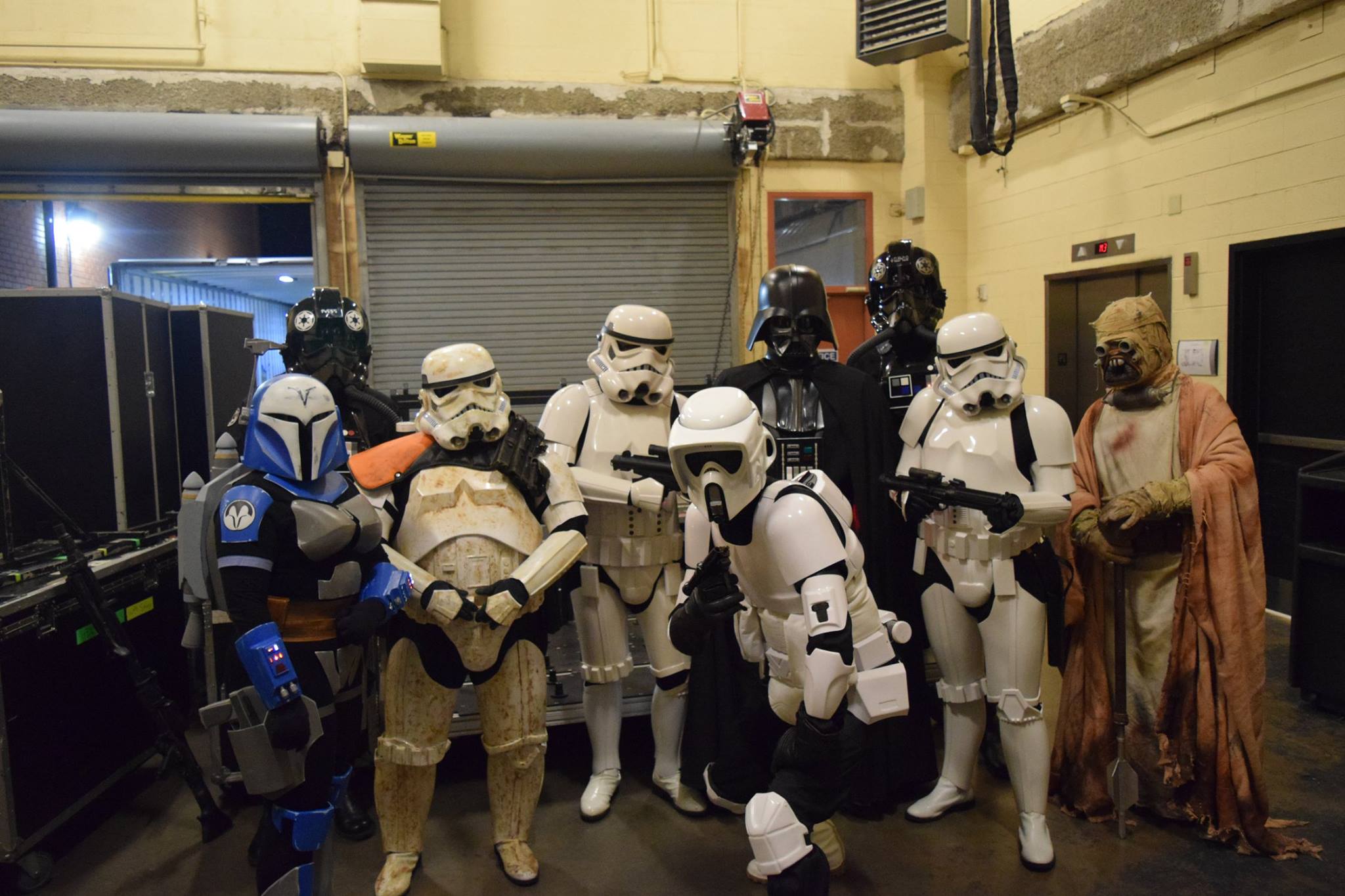 In a manner reminiscent of the Beatles famous “Abbey Road” album cover, members of Garrison Corellia crossed Washington Street with totes in tow… grinning with excitement of their much anticipated performance with Alfred Matthew Yankovic, or more prominently known as “Weird Al”. An honorary member of Vader’s 501st, Weird Al performs a parody of John McClain’s “American Pie” called “The Saga Begins”. The song is a recap of Episode I of the Star Wars Saga, and members of the 501st Legion are regularly seen on stage assisting Weird Al with a mini-dance skit in similar fashion to the Rockettes!

On Thursday, September 22nd, nine members performed on stage with Weird Al at The Clay Center in Charleston West Virginia, with the assistance of three Garrison Cadets as Squires. The evening began by dropping our gear in the dressing room before receiving a quick orientation for placement on stage. We were treated to a pizza dinner, graciously provided by Weird Al and the Clay Center, after a quick run-through of our skit. As always, we enjoyed catching up with one another, eating with the feeling of being with family once again! Afterward, we returned to our dressing room to prep our gear and run through our skit a few more times while using the mirrors to help us synchronize. We even donned our helmets one time through to ensure we could see and move the right way… Our excitement was building. 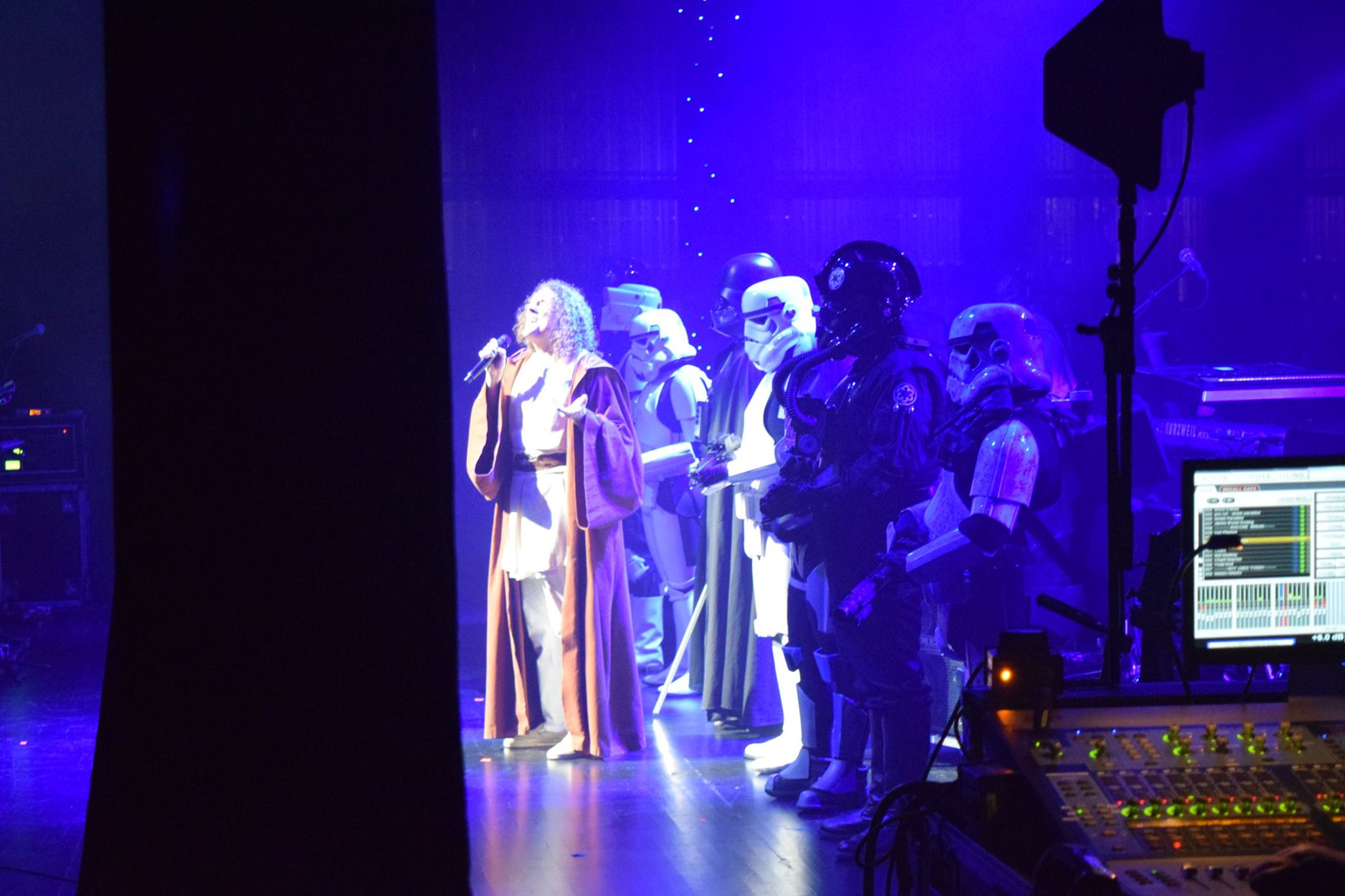 At the start of the show, we were treated to box seats. Due to the time we were required to be ready backstage, and the amount of time it takes us to suit-up, we were only able to watch the first 25 minutes of the show. Once suited-up and backstage waiting for our “5-minutes of fame”, we took some pictures to pass the time. As we took the stage, the crowd’s excitement was evident. Good thing we were helmeted as I figure our smiles would have made us all look like the Joker and scared everyone off!

The performance went off without a hitch and after a 30-minute break, we participated in the autograph session with the people who purchased VIP tickets. Some of us stood behind Weird Al as backdrop for photos while he signed autographs and spent time individually with everyone. The rest of us circulated the room, interacting with the fans, taking photos, and helping them to pass the time in line. After all the VIP’s were gone, it was our turn with Weird Al. We helped with his “Register To Vote” Campaign by posing for some promotional photos in order to get the perfect one for his website.Then it was our turn for photos and autographs, some of us getting our performance passes signed, while others their helmets.

Overall it was a long night, but an enjoyable experience we all appreciated having the opportunity to do. Since 90% of what we do is charity work, and while it is in and of itself the most rewarding thing we as Corellian’s get to do, it is occasionally nice to do something a bit different.

Thanks Weird Al Yankovic and staff for your hospitality! ~ Graciously… Garrison Corellia “Never Tell Us The Odds!”

For more photos of the event, visit our Facebook page.